It is the first time anyone has come to visit him. He has been here for 69 years. Walter H Andrews, Pilot Officer and Air Gunner for the Royal Canadian Air Force, 29th January, 1944. He was a son, a brother and an uncle. His body was recovered and eventually laid to rest in a small plot on an outskirt of Berlin after he was shot down in his Lancaster in a night raid.

During the Second World War, The Royal Air Force’s Bomber Command played a major role in the strategic bombing offensive against Germany that contributed to eventual Allied victory. Marshal Arthur Harris, the Commander and Chief of the Bomber Command believed that they could bring Germany to her knees by the destruction of industrial cities and the demoralization of the civilian population. During the course of the war, Bomber Command flew over 387,000 sorties and lost over 55,500 men, representing a death rate of over 44%. The average age of these crews was just twenty-two.

Today we are visiting Germany under different circumstances, and in a seemingly different world. It’s hard to imagine the hostility that these boys (most were not yet men) once knew. Only half returned home to live out their lives. The rest are here, their stations marked by modest white gravestones. The savage call to arms comes at a great expense.

In his last year, Walter Andrews was just twenty-two. In his final post, Walter wrote home to tell his parents about the war. It reads like any other letter a travelling child might send to a parent. “I am meeting a lot of new people. The boys and I are going out for a few beers. Merry Christmas. I miss you. I love you. W.H.A”. These are the words that his parents would read and re-read at every holiday. This is the letter that was passed down to his nephew and then on to his great-nephew. This is the legacy that is carried forward by his family. This is why we are here.

The guestbook at the gate has names of visitors from all over the British Commonwealth. Simple comments are scribbled in the margins of the book: “Thank you”, “We are eternally grateful”, “May you rest in peace”. Signing this book is not just a simple role-call of tourists filtering through another monument. For those who sign the book, they are remembering, showing their gratitude and maybe gaining closure for a long-lost relative. It’s like saying to these soldiers: “Hey, you are not alone. I’ve come here to visit you in your place of rest. I will be your witness. I will remember what you have sacrificed for me. I am forever humbled by your actions and grateful for the role that you played in defending our world.”

I know this is what Doug is thinking as he signs his name. Coming to this graveyard is very significant for him and his family. Every grave marks a life and endless potential. Every name belongs not just to someone, but also to someone’s family. These are our legacies. We have come here to remember.

The names of those who in their lives fought for life
Who wore at their hearts the fire’s center.
Born of the sun they traveled a short while towards the sun,
And left the vivid air signed with their honor.

– Stephen Spender, I Think Continually of Those Who Were Truly Great

During the course of the war, 92% of Berlin was destroyed from the air raids. The Nazi regime was defeated and the city was freed from Hitler’s Dictatorship (only to be replaced by another Dictatorship). However, Germany’s liberation from communist rule and the subsequent tearing down of the Berlin Wall, has restored the city into a vibrant and thriving metropolis. It is one of Europe’s truly modern cities and is rapidly being rebuilt and pieced back together.

The stretch along Unter den Linden from the Brandenburg Gate to Alexanderplatz is the most impressive reconstruction effort that I have ever witnessed. 70 years ago Hitler’s army used to march down this street. Now, the city is like a phoenix rising from its ashes.

They say that it takes a strong remedy to cure a fatal illness. When the world is sick, it’s thousands of people like Walter who volunteer to defend it. When everything is destroyed, it’s the resiliency of the human spirit that moves forward and rebuilds. And, if we stop for a moment and take a good hard look at our world, we will realize that we are the privileged, the educated, the liberated. All we have to do is remember. 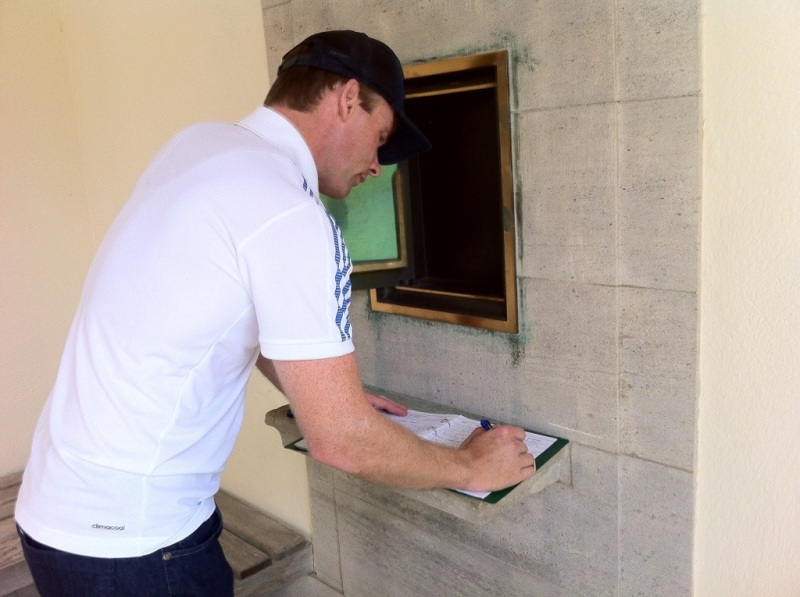